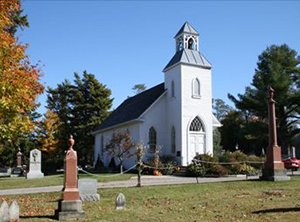 Opened in 1852, St. Mary’s is the oldest church in Manvers township (now part of the City of Kawartha Lakes).  About 1837, Isaac Preston and his sons came from Ireland and were ‘granted Crown land’ in the area.  Two of his sons, Alexander and Isaac, settled on the 10th concession in what was then a pristine wilderness.  Alexander, and his wife Mary, took a keen interest in the establishment of an Anglican congregation, and offered their house for services whenever there was a clergyman in the area.  Eventually, land was donated by Alexander’s brother, Isaac Preston, for the establishment of a church building and burial ground near what is now Lifford Road.  The construction of the church was carried out by “work  bees” of volunteers from families in the community.  The first service in the new church (which still had temporary flooring) was in June of 1852: the funeral service for Mary Johnston Preston (37 years of age) wife of Alexander Preston. The name of the new church–dedicated to St Mary the Mother of our Lord–was inspired by the life of Mary Preston who, like Jesus’ own mother, was a faithful and exemplary disciple.  In its early years, the congregation at Lifford was relatively large.  But with the coming of the Midland Railway in 1857, Bethany soon became the commercial centre of the area.  St Paul’s, Bethany, built in 1878, ultimately became the largest church of the parish.  The Rectory was also located in Bethany.  St Mary’s was repaired and redecorated in 1931.  Trinity the Marsh was joined to the parish in 1932.  In 1973, the parishes of Cavan and Manvers became one parish.  In 1993, St Mary’s was destroyed by fire.  But by 1997, it had been rebuilt, thanks to the generosity and tenacity of people in the local community and farther afield.  Today, St Mary’s, Lifford, is officially a ‘chapel of ease’ of the Anglican Parish of Cavan & Manvers.

Located in the rolling hills of Bethany, with mature trees and splendid views of the surrounding countryside, St Mary’s cemetery is a place of true peace and tranquility.  The cemetery and chapel are managed, on behalf of the parish Corporation, by a dedicated Board of Trustees.  Contact with the cemetery manager may be arranged via the parish office in Millbrook.

Finding St. Mary’s Lifford
St. Mary’s is located at 396 Lifford Road, Bethany. To get there, take Hwy #7A (either east or west), turn north onto Hwy #35 and follow along Hwy #35 to Lifford Road, then turn east. Follow along till you reach 396 (it is about two miles east of Hwy 35 on the south side of the road).