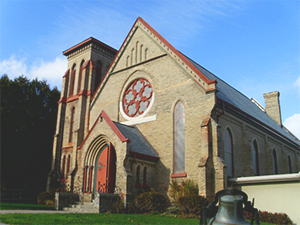 Established in 1858, St Thomas’, Millbrook, is the parish church of the Anglican Parish of Cavan & Manvers, Deanery of Peterborough, in the Diocese of Toronto. The parish  includes St. Thomas’ plus three ‘chapels’ and four cemeteries.

Created in 1839, the Diocese of Toronto is the most populous of the 30 diocese in the Anglican Church of Canada and extends over 26,000 square kilometres, with 183 parishes and 230 congregations. Nearly 5 million people live within the boundaries of the diocese, 376,000 of whom identify as Anglicans.  The present diocesan bishop is the Right Reverend Andrew Asbil, 12th Bishop of Toronto. His episcopal seat is the Cathedral Church of St James, Toronto.  The diocese is divided into four Episcopal Areas, each with a suffragan (auxiliary) bishop. Our bishop, the Area Bishop of Trent Durham, is the Right Reverend Riscylla Shaw. Her office is located in Whitby,  Ontario.

The Anglican Church of Canada is led by the Primate, Archbishop Linda Nicholls, and governed by the General Synod. The ACC is a member of the world-wide Anglican Communion. Under the spiritual leadership of the Archbishop of Canterbury, Anglicans throughout the world share common beliefs, traditions, and ways of worship; however, each national church or province is autonomous and self-governing.

The ‘mother’ church of Anglicanism, the Church of England, traces it origins to the 6th century missionary activity of St Augustine, first Archbishop of Canterbury, although  Celtic Christianity was well-established in  Britain from the 3rd century.  During the 16th century Reformation era, the English Church formally separated from Papal authority. Post-Reformation classical Anglicanism is sometimes described as a “middle way” between Protestantism and Roman Catholicism.

The first Anglican Eucharist in North America took place in Frobisher Bay in1578.  With missionary and colonial expansion and emigration, Anglicanism began to spread from Britain to other parts of the world, including to what is now called Canada.  The first Anglican bishop in Canada, the Right Reverend Charles Inglis, was consecrated in Halifax, Nova Scotia in 1787.

As a community of faith in the risen Christ, we are called to be a living sign of God’s reign in the world and to be a place where all people are sincerely welcomed, nurtured, and sustained in their spiritual journeys.

To realize our vision, we celebrate each Sunday the presence of Christ in Word and Sacrament; we go forth from worship strengthened to love and serve all people in the name of Christ; and we strive, through prayer and study, to deepen our experience and understanding of the presence of the living God in our own lives, in the lives of others, and in all of creation.