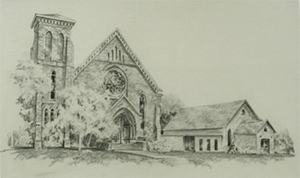 Brief History of the Parish

The growth of the Anglican Church in Cavan township began in earnest with the arrival of the Reverend Joseph Thompson, the first resident clergyman.  Ordained priest in the Church of England by the Bishop of Chester in 1797, he came with his family to Upper Canada, via Quebec, arriving in Cobourg in July of 1819.  As a settler, as well as a missionary, Thompson had been “granted land by the Crown” which was located on the 10th concession of Cavan near the present village of Ida.  He eventually built a log cabin on part of this land, where he both lived and conducted Sunday services.  He also ministered to Christians of all denominations in the area.  In 1820, to accommodate a growing population in the parish, two school houses were built as temporary places of worship: one near Thompson’s log cabin; the other in the southern part of Cavan on the 4th concession (now Zion Line).  The school house near Thompson’s cabin was replaced in 1824 by a new frame church: the first St John’s, Ida.   In 1833, Thompson was succeeded by the Reverend Samuel Armour, a fair-minded clergyman who was often a voice of reason at a time of tension, and even violent conflict, between Protestants and Roman Catholics in Cavan.  In 1837, the school house on the 4th concession of Cavan was replaced by another new church in the parish: St Paul’s.  In 1853, the Reverend Thomas Allen, a graduate of Trinity College, Toronto, succeeded Mr Armour as rector.  By that time Millbrook had grown into a prosperous commercial centre; however, there was still no Anglican church in the village: residents of Millbrook had to walk a considerable distance to St Paul’s to attend church.  A new church, dedicated to St Thomas the Apostle, was built on Centre Street and opened in the fall of 1858. The Parish of Cavan continued to grow steadily under Archdeacon Allen’s leadership.  In 1863, land in the south-east end of the parish was purchased and Christ Church was constructed east of the village of Bailieboro.  It was replaced by a second larger church on the main street of the village in 1891.  In 1866, St John’s, Ida, was destroyed by fire; however, by 1867 a new church had been built on the same site.  In the west end of the parish, Trinity the Marsh opened in 1876. By 1883, the Millbrook congregation had grown so large that more space was urgently needed.  Plans were drawn up, funds quickly raised, and a new St Thomas’ Church, described as “a superb example of Ontario high church Gothic revival architecture,” was constructed on the same site and opened in 1885.  In 1884, Thomas Allen’s son, William joined his father as the assistant priest.  Twenty-one years later in 1905, William Allen succeeded his father.  Canon Allen served as parish priest until he retired in 1928, completing 75 years of continuous ministry by father and son.  At this point in its history, the Parish of Cavan – with its humble origins in Joseph Thompson’s early ministry – now consisted of five churches: St John’s, Ida; St Paul’s, 4th Line; St Thomas’, Millbrook; Christ Church, Bailieboro; and Trinity the Marsh.  The coming years brought changes.  In 1932, Trinity the Marsh was absorbed by the neighbouring Parish of Manvers.  In 1971, fire caused extensive damage to St Thomas’ church and bell-tower, but both were restored.  In 1973, the parishes of Cavan and Manvers amalgamated.  In 1985, St John’s was badly damaged by a tornado, but the church was quickly repaired and a new hall was constructed. In 1988, St John’s was removed from Cavan & Manvers parish and formed a new parish with Christ Church, Omemee.  In more recent times, two of the churches of the parish were closed: St Paul’s, Bethany in 2005; and Christ Church, Bailieboro in 2009.  Thus, St Thomas’ has become the sole church – with Trinity the Marsh, St Paul’s, and St Mary’s, Lifford, now designated as ‘chapels of ease.’  The parish maintains four historic cemeteries: St Paul’s, Zion Line; St Mary’s, Lifford; St Alban’s, Janetville; and the Pengelley family cemetery, South Monaghan; where may be found the grave of Joseph Medlicott Scriven (1819-1886), composer of the famous hymn, “What a Friend We Have in Jesus.”  We acknowledge that the Parish of Cavan & Manvers is located in Treaty 20 territory (1818), the traditional land of the Mississaugas of Hiawatha First Nation and the Mississaugas of Scugog Island. 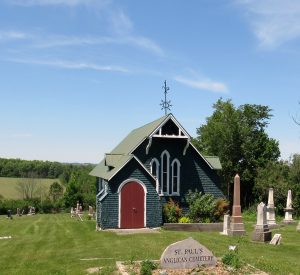 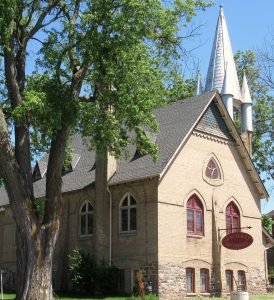 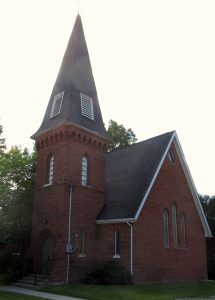